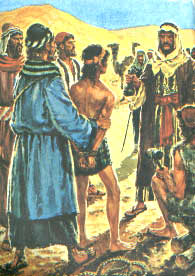 Most of us can look back over our lives and see dreams we have had which never materialized. In our early years all of life is before us. Anything is possible and we dream big dreams. Time and experience “correct” our hopes and we then often realize that some of the things we wished and believed for will never come to pass.

It’s a good thing to dream big even if they don’t all pan out. There is a particular kind of dream, however, that must come true no matter what. You may have one like that in your dream bag. Joseph in the Old Testament had such a dream when he was only seventeen.

Joseph was one of twelve sons of his father Jacob, but he was hands down the favorite, and both he and all his brothers knew it. This is what he dreamed: “for behold, we were binding sheaves in the field, and lo, my sheaf rose up and also stood erect; and behold, your sheaves gathered around and bowed down to my sheaf” (Genesis 37:7).

Basically he dreamed that he would someday have authority over his family, and they would bow the knee to him. Of course this was something they did not want to hear; they were already jealous of Joseph, and the idea that they would ultimately be subject to him was galling to them. The brothers had a solution. “‘Now then, come and let us kill him and throw him into one of the pits; and we will say, “A wild beast devoured him.” Then let us see what will become of his dreams‘” (Genesis 37:20)!

They thought they succeeded. They sold him into slavery to a passing band of traders headed for Egypt. Joseph’s brothers mistakenly thought that if they got rid of Joseph they would get rid of the dream, and that would have worked if it had been Joseph’s dream. What they didn’t understand is that the dream had really been God’s. Actually, maybe they suspected as much. In that case, they found themselves resisting Almighty God. Not a good place to be.

In the story of Joseph it is remarkable the way God wove circumstances together over the next thirteen years to bring his dream to pass. “Let us see what will become of his dreams”? Oh yes, they would see! And by the time it happened they were more than ready to submit to Joseph AND to God. In the end the fulfillment of the dream meant their provision and survival as a people. By then they were grateful for the dream and the dreamer.

Do you have a God-given dream for your life that has yet to reach fruition? First, be sure the dream really came from God. Nothing is ultimately as disheartening as hanging on to foolishness instead of real faith. But if you know God gave it, don’t give up if time or circumstances tell you that the dream is now impossible.

A really good dream with really good results is going to have resistance. Behind Joseph’s brothers was a demonically inspired plan to kill off Joseph, and kill off the dream. Satan always believes he can thwart the plans of God. The devil will try to kill off your dream too.

You may go through many setbacks and hardships as you wait (though probably nothing as severe as what Joseph endured). God is working it all for your good – nothing is wasted in his economy. When it is over and your dream has come true you will you be able to say along with Joseph; “God meant it for good in order to bring about this present result” (Genesis 50:20). THAT my friends, is a dream worth waiting for!