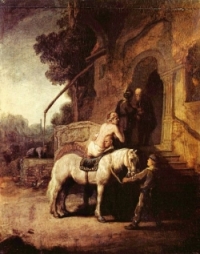 After a discussion with Jesus about how to inherit eternal life, a lawyer who wished to justify himself asked: “And who is my neighbor?” Jesus replied as follows with the parable known as the Good Samaritan.

A man was going down from Jerusalem to Jericho, and fell among robbers, and they stripped him and beat him, and went away leaving him half dead.

But a Samaritan, who was on a journey, came upon him; and when he saw him he felt compassion, and came to him and bandaged up his wounds, pouring oil and wine on them; and he put him on his own beast, and brought him to an inn and took care of him.

On the next day he took out two denarii and gave them to the innkeeper and said, “Take care of him; and whatever more you spend, when I return I will repay you.” Which of these three do you think proved to be a neighbor to the man who fell into the robbers’ hands?

We use the word neighbor in a number of different contexts. If you were asked the question “who is my neighbor?” today how would you answer?

Is it really safe to play Good Samaritan in our crime ridden and sue-happy society? So how does the parable still apply?

Who is my neighbor?

Did you know that so called “Good Samaritan Laws” are named after the guy in this parable? They are laws to protect those who voluntarily do good deeds for strangers from later liability in case unintentional harm is caused. Therefore we think of the word Samaritan in a positive context—as a good person.

Not so in Jesus day. To the lawyer to whom the Lord was speaking, Samaritans were loathsome people, apostates and spiritual half-breeds. Samaria was the land of the Northern kingdom of Israel when the twelve tribes split after Solomon’s death. Rather than travel to the temple in Jerusalem for worship as prescribed by Jewish law they set up their own “high places” and fell into idolatry big time. Their doctrine was mixed and muddy and Jews definitely looked down those noses at them. Open hostility was common.

So a Samaritan was the perfect pick for Jesus’ story, right? When we don’t like people or think we are better than them, that’s the last kind of person we want to be beholden to for doing the right thing. Don’t we often demonize those we are biased against in order to justify our negative opinions?

Perhaps that is the first lesson of the parable. Remember that Jesus told the story after the lawyer asked “And who is my neighbor?” (Luke 10:29) It’s the motive behind the guy’s question that’s important. He wanted to justify himself—make himself look good to the audience present, most of whom he probably considered on a lower spiritual rung than himself. He also wanted to test Jesus and see if he was up to par as a teacher.

As the story unfolds, those who held the so-called moral high ground failed the neighbor test but one who acted without regard to rank ended up the hero. First a priest came by and then a Levite and saw the man who was robbed and beaten and crossed to the other side of the road to avoid him. Both of these men represent Jewish religious authority. Surely they above any would be expected to assist a helpless man by the side of the road. But no.

Rather, a man of whom dishonor was expected acted more righteously than either of them. The Samaritan did not see religious rank; he just saw the need and acted compassionately to a perfect stranger. He interrupted his own trip to carry the man to an inn and paid for his care. He promised to return and pay any additional expenses incurred while he was gone.

The Samaritan may have been in doctrinal error but he seems to have understood better than the priest or Levite God’s heart spoken in Isaiah 58:6-7, “Is this not the fast which I choose, to loosen the bonds of wickedness, to undo the bands of the yoke, and to let the oppressed go free and break every yoke? Is it not to divide your bread with the hungry and bring the homeless poor into the house; when you see the naked, to cover him; and not to hide yourself from your own flesh?”

At the end of the parable Jesus asked the lawyer which person in the story proved to be a neighbor and the man rightly answered, “’The one who showed mercy toward him.’ Then Jesus said to him, ‘Go and do the same.’” (Verse 37) Mercy and compassion are obviously the real criteria for the definition of neighbor. That means mercy and compassion without regard to rank or status.

What does this mean to us as we apply the parable to ourselves? When the priest and the Levite saw the beaten man on the road they made some judgments. Perhaps one said to himself, “My errand is more important than this guy. I’m on God’s business.” Or, “This looks like a dirty affair and I can’t show up to the synagogue with blood all over my robes.” How about this: “I wonder if this man was asking for it. He should have been more careful than to travel at night alone.”

How often do we make judgments on our neighbor as criteria for whether they deserve to be helped? How often is our own convenience our top consideration? How often do we hurry on to avoid seeing what might arrest us? These are the things we have to ask ourselves if we want to hear Jesus speaking to us now.

If our secret heart were revealed would we look more like the priest, the Levite or the Samaritan? Maybe it depends on WHO was the one is need?

Is there anyone or any group that you feel morally superior to? How would that influence treating them like a neighbor by Jesus’ definition?

Have you ever tried to “justify” yourself in front of others so you look better than those around you?