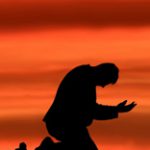 “I surrender all. All to thee my precious Savior, I surrender ALL” (Lines of an old hymn)

Anyone who knows me well knows that I believe in the bulldog approach to prayer: get hold of it and never let go until the answer comes. God says in James 4:2, “You do not have because you do not ask” and in Luke 11:9, “’ask, and it will be given to you; seek, and you will find; knock, and it will be opened to you.’” Far be it from me to ignore such powerful mandates!

Not surprisingly, a lot of my prayer instruction revolves around being tenacious and resolute. I also highly admire and recommend prayers that are birthed in the kind of desperation Hannah of the Old Testament had when she prayed for a child and got Samuel. No doubt about it, God honors desperate determined prayer. Yet, here I am now to suggest a kind of prayer that is practically the polar opposite of all that.

Relinquishment breaks all the rules

I call this extremely powerful prayer type the prayer of relinquishment. As effective as it is, I have only used it rarely and I’ll explain why later. Relinquishment pretty much breaks all the usual rules: no asking, binding and loosing, fasting, prayers of agreement, declaring God’s Word or rebuking the enemy. And—no desperation required. Rather, relinquishment surrenders to the circumstances just as they are. As I think of it, perhaps it is really taking a step beyond desperation.

My first introduction to this prayer that seems to so run against my natural grain was from a story told by the late Catherine Marshall about her own life in her book Meeting God at Every Turn. Maybe I accepted it initially because I admired Catherine so much and God so often spoke to me through her writing—still does in fact. Though she never knew it, she was a mighty spiritual mentor to me and because of her I had hopes that I too would someday be a writer who would encourage others.

Catherine was diagnosed with tuberculosis in 1943. Her first thought was that she couldn’t possibly have this disease or obey the doctor’s order to complete bed rest. After all, she had a three-year-old son to care for and was the wife of a prominent Washington DC pastor with a busy congregation. But it was true and as month after month of illness wore on she was in dire need of divine healing.

After two years of monthly chest x-rays showing no improvement whatsoever despite every conceivable kind of prayer and all the faith she could muster she “plummeted into real despair” as she puts it. What more could she possible do? This is how she goes on to tell what happened next.

“Only one way was left. Perhaps I had held back one heart’s desire. So after many days of struggling, I handed over to God every last vestige of self-will, even my intense desire for complete health. Finally I was able to pray, ‘Lord, I understand no part of this, but if You want me to be an invalid for the rest of my life—well, it’s up to You. I place myself in your hands, for better or for worse. I ask only to serve You.”

Later, in the middle of that same night she suddenly awoke with Jesus literally in the room. He spoke with her and his appearance and instruction to her resulted in total healing. As she told the story more than 35 years later in her book she said the incident “remains to this day the most real and vivid experience of my life.”

There we have the essence of the prayer of relinquishment. Agreeing to stop asking even for what we might assume is God’s best will (as surely healing is). Agreeing to accept our circumstances and not continue to pray for change. Relinquish our own will in the matter and trust God for a bigger plan and purpose than we can see now. Give up! Oh what a bitter pill that is to swallow because you have to really mean it. I know.

The first time I prayed the prayer of relinquishment I did it under duress even though my situation was nowhere near as unfortunate as Catherine’s. I’m embarrassed to admit it but I was pretty thick headed so God had to send me a messenger to tell me what was needed in my case.

I was at a place in my job where I felt absolutely done. The end of the end. As desperate as I was for change there seemed little possibility of it. Month after month of same old-same old rolled along like a rat in an exercise wheel going nowhere. I spared no effort loudly complaining, murmuring and begging my weekly prayer group to beseech God to GET ME OUT OF THERE. They faithfully prayed for me every which way and we saw no results.

One night I got a call from a man in the group and he told me he felt that God had given him a word for me regarding my situation and he wanted to come over and talk to me. I was surprised he didn’t want to wait till Friday night when we would all be together but then I was also excited to hear what he had to say. I was excited that is, until he actually said it.

He told me the Lord had reminded him of a time in his own life when he had felt the same way about his job but then when he had finally surrendered it to God entirely with no hope that anything would ever change a whole new direction opened up miraculously. He said, “Barbara, I think God wants you to do the same thing. Agree to be satisfied right where you are and trust God. I felt very strongly God wanted me to tell you that.”

I wasn’t encouraged but didn’t want him to know it. I thanked him for faithfully obeying God and then said, “Well Steve, actually I’ve really already done that. But I’ll think this over and pray about it.” After he left the thought went through my mind, “WHEN did you already do that?” I couldn’t pinpoint a time when I had relinquished my own plan at all. With dragging steps I proceeded to my bedroom and kneeled down by a rocking chair and spoke out loud the words of surrender.

Even though I hadn’t felt much of anything at all while I prayed and didn’t feel much different afterward I knew I had meant those words with my whole heart. Now it was in God’s hands to do something or nothing—whichever he desired. No more prayers. No more complaining. After a few days passed a peace (or maybe a better word is contentment) settled in. Nothing changed at work but I had changed. At least the desperation finally lifted.

Exactly three weeks later a huge “something” happened after all. My company did a major reorganization and I was offered an exciting and challenging promotion. I was off the treadmill. Had my prayer of relinquishment unlocked some door to a spiritual law I little understood? It seemed so.

Well, you might say, why not just skip all the other kinds of prayer up front and head straight for the prayer of relinquishment? I don’t claim to understand all the mysteries of it but it doesn’t appear to work that way. Relinquishment usually comes only after every other prayer type has been thoroughly tried and exhausted. Desperation included!

I mentioned earlier that I have rarely used it and that’s one of the reasons why. But mainly it’s the fact that you have to actually mean it when you surrender. You can’t relinquish your own will as a ploy to get God to move. He knows. And in your heart you know too. So relinquishment is surprising hard because there are some things we care for so much we can never honestly lay them down at God’s feet and walk away.

You might wonder if this kind of prayer is scriptural since the word “relinquishment’ isn’t found in the Bible as far as I can tell. Yet, I think the concept is definitely there. Wasn’t that Job’s heart when he said, “Though He slay me, I will hope in Him.” (Job 13:15) But I think it was Jesus that expressed the prayer of relinquishment best. “’Father, if You are willing, remove this cup from Me; yet not My will, but Yours be done.’” (Luke 22:42)

Have you tried all else? Are you ready to be finished with your way and accept only HIS way? Maybe this prayer belongs to you.