Squatters Rights – Is the devil infringing on your land?

“Submit therefore to God. Resist the devil and he will flee from you.”James 4:7 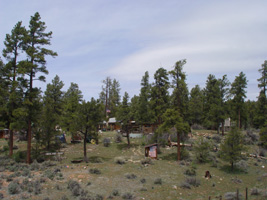 Suppose you had a vast estate – more land than you could ever use or develop? You pay taxes on it and ride around on a horse every once in awhile to survey all your holdings.

Finally you notice some evidence of someone “squatting” on your land. An old log cabin at the edge of the property shows signs of being used. Oh well, they aren’t hurting anybody are they? Don’t you have more than enough? Live and let live; that’s what you always say.

Now you are gone and your property passes to your son. He remembers how he rode with you on certain occasions to inspect the land. You never did anything about the squatters so neither will he. He figures you had a reason for letting them live there. Anyhow, by now they’ve lived there so long they have established a little vegetable garden and they’ve put up some new buildings.

Finally, all the vast holdings pass to the third generation – your grandson. But he’s got big plans for his inheritance. Squatters are not welcome. He boldly tells them to leave and they nod their head and go right back to business as usual. After all, they’ve lived here a long time and they’ve really settled in. Why should they listen to some fanatical upstart?

Next your grandson goes to court and gets an eviction notice and posts it on the door. They think that’s mighty irritating and tear it down. They decide to build a fence around their little spread with a “Keep Out” sign so he will get the message that they now consider this their land. After all, isn’t possession nine tenth of the law?

The grandson wonders what it’s going to take but he isn’t giving up. He legally establishes his property line in court and then asks the sheriff to come out and remove them. They are physically ejected but they hover around just over the line. When things settle down, they plan to return.

Your grandson is far smarter than you or your son however. He immediately tears down every building they used and destroys the garden, the fence and every trace of them ever having been there. Nor does he leave the land vacant. He begins to build something new. The squatters never return. They move on down the road and find a small abandoned cabin on someone else’s property and start over again. Hey, there will always be landowners who put up with squatters! THE END

That story is a parable of how the devil tries to live on your land – even through multiple generations. He sneaks to the edge somewhere and squats down in a way that doesn’t seem to make a whole lot of difference to begin with. He may use some sin you consider insignificant to gain entry. Just a white lie, just one X-rated video, shoplifting small stuff at first (he can move you to grand larceny later). No big deal you think.

Don’t forget however; “For I, the Lord your God, am a jealous God, visiting the iniquity of the fathers upon the children to the third and fourth generations”. (Exodus 20:5) Whatever sin you allow in your life is a curse not only for you but your future generations unless you repent and tear down that house.

Once the devil has taken up residence he will be hard to remove. He will ignore, fight back, hunker down and fairly demand to be blasted out before he finally leaves. He will look for ways to return and squat once again unless you are smart and use your life to build something new.

How can you prevent this from happening? Inspect your life closely and don’t take any unholy thing you find for granted. Refuse to co exist with the devil. Believe me, you don’t have to. “Resist the devil and he will flee from you.” (James 4:7) Resist him before he has taken up residence and has any legal ground to stay.

Perhaps you are on the other end of this scenario. Most of us can see there are patterns of sin which follow in families –addictions, sexual sins, anger, cheating, and stinginess to name a few. If you find that you have inherited generational sins from your forebears, don’t accept that plight. You do not have to allow them to remain no matter how many generations they go back.

Repent on behalf of whoever allowed the sin originally. Cover the curses with the blood of Jesus. Reject any part in any pattern of such sin and demand that Satan leave your property immediately. Watch closely for any attempt of his to return to start a new cycle.

Why do we allow demonic squatters on our land? Is it because we think it won’t matter too much? Do we have a lazy, live and let live attitude? Are we afraid to do what it takes to remove them permanently?

God has bequeathed to each of us a wonderful life, filled with vast possibilities. We are meant to use all he has given us for our pleasure and enjoyment here on earth and for his glory now and in eternity. Waste nothing! Guard every inch that is yours. Build praise and thanksgiving and a humble heart on every acre and allot no room for squatters.