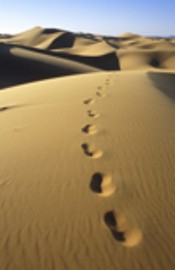 Samson was one of the Judges in Israel during that time in their Old Testament history. Once when Samson was a young man and traveling to the town of Timnah he suddenly encountered a lion which came roaring up at him to attack. “The Spirit of the Lord came mightily upon him, and he tore the lion apart…though he had nothing in his hand” (Judges 14:6).

Samson defeated his enemy and he did it so completely that it could never attack him again. That is exactly the kind of outcomes to battles we would like to have in our Christian walk. Something comes up against us suddenly and WHAM! We hit it and knock it out completely. Dead – it can never rise against us again.

There is a sweet outcome to this kind of victory. Here’s what happened to Samson. Some time after the incident with the lion, he was again in the same vicinity and “he turned aside to see the carcass of the lion” (Judges 14:8). What he found was a swarm of bees and a huge honeycomb residing in the lion carcass.

Samson ate the honey and shared it with his family when he got back home. Something sweet came out of his fierce fight. Now look at the battles you have been through and see if you can’t find a spot of honey. Hopefully, the carcass of your one-time enemy is laying dead just as Samson’s was. As you return to examine it, what do you find? Ah, sweet victory!