Face Time With the Neighbor 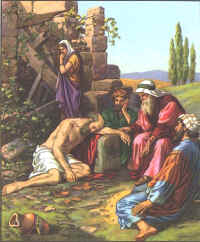 Have you ever felt that if you could have just a few minutes of face time with God you could seal the deal and convince Him to take action on your behalf? You know your arguments would finally prevail and prayer that has been frustrated would experience movement. C’mon now, be honest! I’m not the only one, am I?

Actually, I know I’m not the only one. Years ago I discovered Job felt the same way, and knowing it has given me great comfort. Job was sorely afflicted and disheartened and his friends’ attempts at being useful weren’t helping. They simply didn’t understand what he was going through.

I can hear the frustration in his voice as he cries out: “My friends are my scoffers; my eye weeps to God. O that a man might plead with God as a man with his neighbor!“ (Job 16:21) He’s saying, ‘Let’s reason together like neighbors over a backyard fence.’

This passage has helped me to approach God in just that way ‘ with down to earth honesty. No super spiritual platitudes. No pretentious formal King James language. No staging or game playing. Job could never be accused of not being REAL with God. I don’t want to be accused of it either.

In the end it was Job, not his friends, who was vindicated. God said to the friends: ”’My wrath is kindled against you and against your two friends, because you have not spoken of Me what is right as My servant Job has”’ (Job 42:7).

When answers are slow in coming don’t be frustrated – be bold instead. Get some face time with the neighbor!