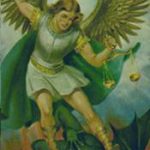 Before David went into battle against Goliath he had a chance to wear some of the “big honcho’s” armor for the fight. Saul was king over Israel at that time and he dressed David in his own tunic, coat of armor and bronze helmet. Then he put his sword in David’s hand. David walked around to get the feel of the new suit but knew right away this was not going to work.

“‘I cannot go in these”, he said to Saul, because I am not used to them.’ So he took them off”(1 Samuel 17:39). Saul was taller than most Israelites and David was still a youth so he could probably have fit twice in Saul’s clothes. Instead, David chose to go into battle with what he knew. “Then he took his staff in his hand, chose five smooth stones from the stream, put them in the pouch of his shepherd’s bag and, with his sling in his hand, approached the Philistine” (Verse 40).

We all know that David won the day. There are hundreds of lessons in the story of David and Goliath but notice this one: he went into battle with what he knew. He did not win in another man’s suit of armor but in his own suit of armor. Can we learn something from this as we face our own battles and encounter our own Goliaths?

God has uniquely gifted each one of us and he has suited us up in what suits us best. When you are going into spiritual battle you can trust that you have the right equipment. Don’t look around for someone else’s. Be yourself. You see, David knew God – that was his best weapon. Put that suit of armor on and you can take down any old Goliath that comes along.