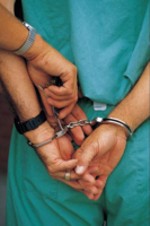 Back in the 1980s I took a Sunday school class studying the book of Ephesians. I still have notes from that class in the margin of the Bible I was using at that time. Even now I remember how remarkable and insightful that teaching was and the young man who taught the class. He was a gifted teacher who would go on to ordination and an apparent earnestness about serving God. He started an inner city church from scratch which grew and prospered. Eventually he moved out of state into other ministry but his original church is still here, vibrant and effective.

Today, however, that man tragically sits in a prison cell for the cold blooded murder of his wife. His teenage children are now basically orphaned, his wife is dead and his life is destroyed. What happened between then and now? You must think that at some point he had left the ministry but that is not the case. Up until the time of the murder, he and his wife were operating as the children’s pastors in their church. According to accounts of church members they seemed an ideal couple and their ministry successful.

Evidently, he finally admitted the murder but he has never expressed sorrow for it. Somehow he was living a double life undetected. From appearances he still had it all together but his heart was far from God, probably for many years. Was he a fraud from the very beginning? Was he arrogant enough to think he was fooling even God? Psalm 10:11 says; “He has said in his heart, ‘God has forgotten; he hides His face; he will never see.'”

What is hidden in the heart of a man will eventually come out into the open. This young minister is clear proof of that. How wise we are if we check our heart continually to see if there are any seeds of deception operating. How wise we are to live in a transparent way before God and men. Otherwise we will experience what Jesus said; “There is nothing concealed that will not be disclosed, or hidden that will not be made known. What you have said in the dark will be heard in the daylight, and what you have whispered in the ear in the inner rooms will be proclaimed from the roofs” (Luke 12:2).