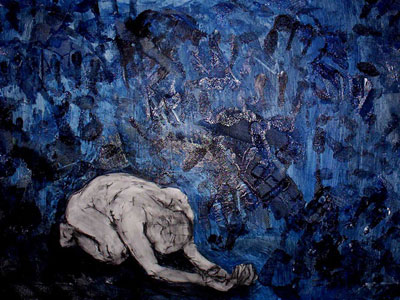 I really admire Job’s remarkable statement to his friends about God. He said; “Though He slay me, yet will I trust Him” (Job 13:15). This was not a comment thrown out lightly during the good times; considering what he was going through “slaying” was not that far off.

Job went from a life full of multiplied blessings to life stripped bare of everything. His children were killed, his property was stolen and now he sat in an ash heap with “painful boils from the sole of his foot to the crown of his head” (Job 2:7). His wife remained but was no help. She suggested Job “Curse God and die” (Verse 9)!

Many times I’ve read this story and asked myself what I would have done. Of course I would like to say I would have said exactly what Job did but my own track record under adversity unfortunately places me closer to the wife. With the paltry trials I have gone through in comparison, I have often murmured, complained and generally pitched a fit.

How was Job able to hold fast to trust in God? I think it is because his relationship with the Lord was never tied into his physical circumstances to begin with. He worshipped and served God for who He is, not for His blessings. We like to think we are the same way but then when a blessing gets ripped away we find out what is really inside of ourselves.

Let’s decide now to model Job’s trust so that the next time adversity comes along we can declare just as he did: “The Lord gave, and the Lord has taken away; blessed be the name of the Lord” (Job 1:21).