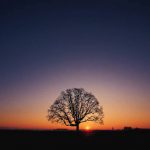 I remember an old song I used to like called; “Que Sera, Sera -Whatever will be, will be.” The words said; “whatever will be will be; the future’s not ours to see, que sera sera.” It was a pretty song but now I realize I don’t really agree with the sentiment anymore.

Fate is the idea that events in the future are fixed in advance and human beings are powerless to change them. Believing in fate leads to a very passive, resigned life. “What’s the use?” “What difference does it make?” “Things are going to turn out how ever they are supposed to turn out.”

Even Christians can gradually be deluded into a “fate” outlook. Since God knows everything he knows how things are going to turn out so that means they are pre-set and can’t be altered. With this attitude we can just sit back and watch our life go by since we can’t change it anyhow. We don’t need to pray for that loved one because if they are going to come out of alcoholism they will anyhow. If that baby is going to die, it will die. If that accident is in our future, just accept it – you can’t prevent it.

Faith is the polar opposite of Fate. Faith is active and engaged in life. Faith is creative and calls forth things that are not yet seen. Hebrews 11:1 says; “Now faith is the substance of things hoped for, the evidence of things not seen.” The scripture goes on to tell us that it was by faith that God spoke the worlds into being. God invites us to FAITH – not FATE.

His invitation is issued in the form of his constant admonition to pray. If prayer does not make a difference, there would be no call to do it. God invited Abraham to pray for Sodom and Gomorrah to be spared; Elijah prayed there would be no rain for three and a half years and there was no rain. Jesus told the disciples in the Garden of Gethsemane to “Pray that you may not enter into temptation.” Instead, they all fell asleep and were not able to resist temptation. (Luke 22:40)

If you are living your life with a “fate” mentality I encourage you to switch to “faith” instead. Get those faith juices flowing and start exercising those faith muscles. Don’t sit by and watch your life float by as if you are a bystander; partner with God and expect his very best. THAT is his destiny for you.