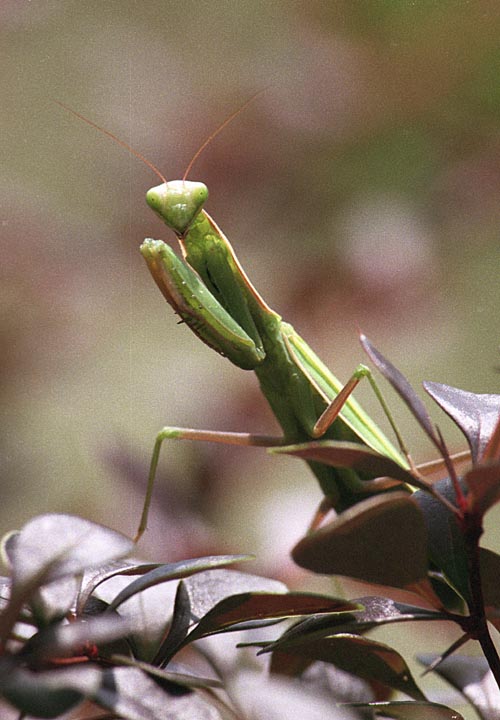 I was busy writing at my computer this morning when I got distracted watching a fight. I heard my Boston Terrier in the back yard giving her gruff little bark and then saw her pawing at the grass. I saw movement and knew she had found “somebody” to tease like a toy.

It was so fascinating I dropped everything and watched, mesmerized. Pepper Ann was battling what I presume was a preying mantis but it had wings so I’m not sure. What a valiant fighter the little guy was. He didn’t just respond defensively; he actually reared up and attacked back. He had pincers on the ends of those long arms which must have been connecting because suddenly my dog would jump back and go around a different way. It was kind of like a boxing match.

In the end Pepper Ann lost interest and moved on to other yard smells and sun spots. Not soon enough for Valiant however. He didn’t make it though it was not for lack of feistiness. I went out in the yard afterward to inspect things more closely. I expected some body damage and for him to be laying defeated on his side or belly up. Not so. There he was in the grass dead but in perfect condition, upright and with his little fists straight up in the air.

I’m quite sure Valiant never read a poem I’ve always liked called; “Do Not Go Gentle into that Good Night” by Dylan Thomas. Even so, he certainly epitomized it. This is a tribute to valiant fighters everywhere.