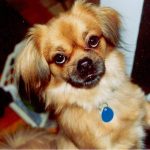 I’ve always been partial to a small story found only in the gospel of Mark about a gutsy little lady who had an uncommon kind of faith. That faith prompted her to an uncommon kind of prayer. Her prayer was answered and she won a place in the best selling book of all time, the Bible.

Faith, we know, is a pretty big-ticket item in the Bible. Faith moves mountains. Without faith it is impossible to please God. Faith believes before seeing. Faith is the door into God’s kingdom. Small faith can yield big results. How did it turn out for the Syrophoenician woman in Mark 7?

She was a Gentile living in the region of Tyre where Jesus was visiting. Since she was not part of the nation of Israel Jesus declined to deliver her daughter from an unclean spirit when she fell at his feet and begged him. “’Let the children be satisfied first, for it is not good to take the children’s bread and throw it to the dogs.’” (Mark 7:27)

The “children” meant the children of Abraham—the Jews. The “bread” was the healing and delivering that Jesus was doing all over Galilee and Judea. But what did Jesus mean about throwing the children’s bread to the dogs? Was he calling her a dog? That wouldn’t be far fetched because that’s often how the Jews referred to Gentiles. But in this case the Lord used a word meaning little dog or pet dog, the kind that sit under tables and beg scraps.

She got his meaning and turned his answer to her advantage. “Yes, Lord, but even the dogs under the table feed on the children’s crumbs.” (Verse 28) She wasn’t above begging; she was more than willing to take crumbs. She was smart enough to know that even one of his crumbs could heal her daughter. And she was right too. Jesus told her that “’Because of this answer go; the demon has gone out of your daughter.’ And going back to her home, she found the child lying on the bed, the demon having left.” (Verses 29-30)

What can we learn from this outsider who was savvier in the faith department than many of Abraham’s children? Perhaps one of the biggest lessons is that no doesn’t always mean no. Yes, at first Jesus rebuffed her but she didn’t let that stop her from pressing further. Neither should we.

Actually, it’s not like Jesus to refuse someone in need so what was he doing? Wasn’t he testing her rather than refusing her? She saw that and didn’t take offense and therefore leave empty handed. Is there a lesson for us? When it appears that God has said NO to us, maybe we should take a second look. Maybe God is trying to find out how badly we want what we are asking for. Maybe what seems like no is really an invitation to show bold unrelenting faith like she did.

Have you ever prayed for something for a time but eventually just gave up? The prayer seemed to fade into the background and be forgotten. Usually that’s because what is being asked for isn’t important enough to us to spurn any obstacles in our way and say to God: “Hey, I need this so badly I’ll get under the table and beg crumbs if necessary.” I’ve found that I’m not above begging when I’m really desperate and MUST have an answer.

Lately I’ve been thinking about those things that are most important to me. The things I can’t shake and refuse to give up on. I’ve been looking for a prayer strategy for a couple of items where it appears God already said no. But then I read the story once again of the Syrophoenician woman and I think I have an invitation to sit under the table.