The Story of Hannah’s Cupboard 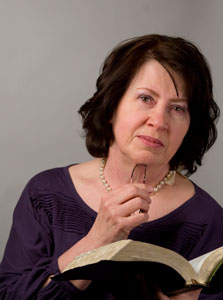 I have always identified with the opening line from Charles Dickens Tales of Two Cities, “It was the best of times; it was the worst of times.” For me that time was 1977. My marriage of eight years shattered into a thousand pieces – which was the worst, and I turned to God – which was the best. On August 13, 1977 at about 9:30 in the morning I surrendered my life utterly to Him and set off on a journey of uncharted trails.

I had two small daughters to raise; I needed a job, a new home, a church – EVERYTHING. My new life was both scary and exciting. I clung to God’s Word quite literally, going to bed each night with the Bible across my chest and if I woke in the night I would read for awhile and then go back to sleep. During the day I searched the scriptures for hours on end and then held tight to all the promises I found. What a wealth of wisdom I discovered and what a foundation God laid in my life.

I found a job, a new home, and eventually a church where both I and my girls could be nurtured spiritually. I fiercely clung to the scripture in Isaiah 54, “For your husband is your Maker” and as I look back over all the years since I can see what a good husband He has been. I argued with Him a lot about decisions He made for our lives and I often pleaded, cajoled and tried to manipulate Him into seeing things my way. He smiled at me patiently and did things the right way.

A Call to Ministry

I call the years of raising Jessica and Danielle to healthy independent adulthood the “bread and butter” years because the main thrust of my life was simply earning a living. But I kept thinking, is this all there is? I wanted to be called to some kind of ministry and to feel that I was advancing the kingdom of God in these last days and yet it never seemed like He was asking me to do anything. I heard other people talk of being called to the mission field and how they resisted and struggled with God over their call before finally giving in. I wondered why He would call the unwilling and leave the willing (me) sit in the pew.

I plodded along. My job in the corporate world was sometimes exciting and challenging, especially after receiving a promotion, but then boring again after I had done the same thing for several years. Through the years I did volunteer at church in the children’s ministry and then later taught adult classes and wrote the Women’s Newsletter. Since the time I was a little girl I always wanted to write and sensed that someday there would be something inside me worth saying. I waited. In the meanwhile there was the routine ebb and flow of life; get up each morning, take the Lord’s hand, put one foot in front of the other, trust Him and obey to the best of your ability, fall back into bed at night and be ready to start again tomorrow.

The Practice of Prayer

There was of course more going on in the background spiritually than I was aware of at the time. Isn’t that always the way? We see our lives one way and then yet another way from a distance after we can look back. God keeps a lot of mystery in our lives. One thing that happened during the bread and butter years is that I learned a whole lot about prayer. A foundational principle of daily prayer took root in me. And then I had the opportunity to teach a growing number of people at my church both the principles and practice of prayer for several years.

After 17 years in a church I thought I would be in for the rest of my life there was a painful church split and God led me into a new training ground. It was there that I attended Bible College, obtained my Bachelors of Theology, preached my first sermon, taught adult classes and did some speaking to women’s groups. It was there that I learned spiritual warfare to a deep degree, led prayer walking for the church and did spiritual mapping for the city of Toledo.

This church had a heavy emphasis on prophetic training and I received many words of prophecy during the four years I was there. I faithfully transcribed them all and waited – I can’t say patiently – for them to come to pass. Still, I felt I was on God’s back burner just simmering away. When was I going to come to a boil? “Okay God, I raised my daughters and now they are adults and on their own; when are you going to do something new for me?”

On December 31st a few hours before 2003 rang in, I sat with my prayer journal and wrote my sense of what the New Year would bring. I had been feeling a growing hopeful anticipation about my future and I wondered if this was coming out of my flesh or God’s heart. Time would tell. I wrote that 2003 would be the year of finishing things. I noted several areas in my life where projects needed to be finished such as quilts that had been in progress for several years.

The biggest thing that finished in 2003 wasn’t on my list. After 26 years at one company, my job was finished. This was BIG, and unexpected. Perhaps at some point I will be able to tell that story more fully. God finally seemed to be heading over to the stove to turn up MY burner. I crossed the parking lot after leaving my office for the last time with a big smile on my face, a dance in my step and a big question mark in my heart. What next? I felt my life was now going to go in a completely new direction. True, it was scary, but I had enough experience over the last 25 plus years with God’s faithfulness to know that He would take care of me.

Hannah’s Cupboard is part of that new direction for my life. The time has come to write, and more. I marvel as I see scriptures that I highlighted years ago come alive in fulfillment now. I marvel as I read back over the prophetic words given to me that sat dormant so long and that now are coming to pass. There are still a bunch of question marks in my heart that I’m sure will be answered over time.

Why “Hannah’s” Cupboard? She’s my role model from the Old Testament and I feel a kinship with her. I love her character. She sat on the back burner a long time too. Hannah had deep intensity for God. She prayed with a passion. She did not give up until God gave her what she sought from Him. She had great integrity and kept her part of the bargain after God gave her Samuel. In the end, she received more from the Lord than she ever asked for. He is the God “who is able to do exceedingly, abundantly beyond what we can ask or think”. (Ephesians 3:20)

Listen to the story of how I came up with the ministry name, Hannah’s Cupboard