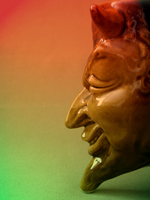 “For our struggle is not against flesh and blood…” (Ephesians 6:12)

I have a theory. The revelation God gives you in the beginning of your relationship with him is especially weighty and should be carefully tended. I believe that’s because you’re going to need it later; almost like a signpost for some part of your future spiritual walk.

This wasn’t something I realized when I first became a disciple of Jesus Christ. Still, as time went along, I began to recognize themes and cycles in my life and they often drew me back to some initial revelation from God. One such example is the night I heard Satan laugh.

I was a brand new Christian, probably only about a week or two old. I was getting my bearings and like a baby bird first noticing it has feathers I wondered if I was destined to use them. Faith and trust were two feathers I thought I’d try giving a couple of flaps.

It was Saturday and I had the day to myself. My husband and I were now separated and he had picked up the girls to spend the day with him at his company’s sponsored event. I spent the day my new usual way, reading the Bible and praying. It felt so good to have left behind emotional chaos in favor of peace. Well, actually, it was a little presumptuous of me to think my flesh was left
that far behind.

At some point during the day an idea percolated that I should EXPECT something of God TODAY. Didn’t Jesus say;
“Ask, and it shall be given to you; seek, and you shall find; knock, and it shall be opened to you”? (Luke 11:9) Okay, let’s test that out. I began to desperately intercede for God to do something (I didn’t exactly know what) that would reveal himself to me very directly and work for my good in my new Christian walk. Though my feathers were small I hoped they were strong enough to produce an answer.

My head was in heavenly places so I didn’t associate what was happening in the natural that day with my prayer request. But after my daughters returned home I came back down to earth and my flesh turned quite ugly. I found out some things about the way the day had gone that stirred up a poisonous stew in me of the most unattractive emotions it was possible for a marriage split to brew. Instead of laying it aside and trusting God I reacted and called my husband. It was not a pretty site.

Afterward, in spite of a counterproductive and venomous blowup, I returned to believing God would meet me for good – before the day ended. I put my daughters to bed and returned to prayer. It kept popping into my head,
“What if this day goes by and nothing happens?” No. That was not acceptable. I would hang onto God and he would answer me.

Finally, about 11:30 PM I went to bed myself. I lay in bed with the realization that nothing had really happened. That did not compute with me. I pressed God one more time. I still believed that with only a half hour left he could do something. And he did.

As I lay there in the still darkness, I heard Satan laugh. It was as if I was overhearing him without him realizing it. He was laughing a most terrible and delighted laugh and saying over and over;
“I really got off a good one today.” It was very real and it shivered my soul.

God had lifted the veil in the spiritual realm and let me eavesdrop on the great deceiver. I was so afraid, the only thing I wanted to do was turn on the light and I came very close to doing so. Yet, something stopped me. I somehow knew if I gave into fear and flipped that switch it would open a door I’d be sorry about later. Instead, a prayer rose up in my throat:
“Lord please lay over me like a blanket.” I said it over and over until the terror receded and my heart stopped pounding. That prayer has continued with me almost every night since, especially in anxious times.

I glanced over at the bedside clock and it was now ten minutes to midnight. With just a few minutes to spare God had certainly done the “something” that I was looking for. But what did he say? What was the revelation? WHY had God lifted that veil into the spirit realm?

Looking back over the day and my ugly reactions in the flesh I realized that I had been used. Flat out snookered. Satan had concocted a little plan to poke at my raw emotions. He had arranged the day “just so” because he knew precisely where my vulnerabilities were. I fell for it big time.

An unshakable resolve settled deep inside me.
I never wanted Satan to use me again. My foolishness had been exposed and I was both indignant and embarrassed to have been his willing puppet. It was the fact that I had served him and his purposes that had delighted him so. That’s what I heard in his maniacal laugh. That’s what God wanted me to remember.

More than thirty years after hearing that laugh it still echoes in my mind. Perhaps God pressed in me such a deep impression knowing how badly I would need to remember the lesson down the road. He was right.

Time after time the devil has tried to use me and trigger a response from my flesh rather than follow God’s blueprint for living.
“But I say, walk by the Spirit, and you will not carry out the desire of the flesh.” (Galatians 5:16) Whenever the laugh was dim in my memory I usually fell short but when I remembered it I got the last laugh.

I treasure that Saturday night so many years ago. Not only did faith and trust prove to be well-founded for a brand new Christian baby but God beat the enemy at his own game. Satan may have been laughing at me then but it was God who really pulled off a good one.