“Say to this mountain…” 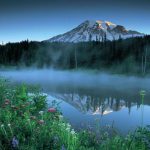 lly unique. It says; “And there was no day like that before it or after it…” (Joshua 10:14) At the point it was written, no one had yet seen its like and if we fast forward to present time we still haven’t. But, is a time coming when we will see its like again? May it be! I feel terribly excited about the possibility.

You must be wondering what in the world happened that famous day. Well let me tell you. It was the day that Joshua commanded the sun and the moon to stand still AND THEY OBEYED. Joshua 10:13 says; “And the sun stopped in the middle of the sky, and did not hasten to go down for about a whole day.” What it means is that the normal cycle of the day was disrupted; daytime was extended “until the nation avenged themselves of their enemies.” (Verse 13)

What kind of faith would it take to speak to an element such as the sun or the moon and have them comply? It’s not as far fetched as it sounds. Jesus spoke of such faith. He said; “Assuredly, I say to you, if you have faith and do not doubt, you will not only do what was done to the fig tree, but also if you say to this mountain, ‘Be removed and be cast into the sea, it will be done.”(Matthew 21:21)

Through the centuries the church has largely spiritualized these words of Jesus and I can understand why. We have never seen a mountain literally moved by faith to my knowledge. Yet, when Jesus spoke the words, he was talking about a literal fig tree that had withered when he cursed it. He was saying it is possible.

Now let’s look at Joshua again and examine what happened that remarkable day. The first thing to know is that God had already declared his will and purpose to Joshua. Israel was fighting five Amorite kings and their armies who had attacked the Gibeonite people with whom Israel had a treaty. The Lord said to Joshua; “‘Do not fear them, for I have given them into your hands; not one of them shall stand before you.'” (Joshua 10:8)

This is the beginning of true and mighty faith. Faith does not swagger around presumptuously telling this disease to go and that mountain to move. It’s not the “name it and claim it” foolery. But once faith gets hold of God’s will in a matter it becomes settled. From then on in, faith will brook no hindrances to God’s purposes being accomplished.

Our best example of the way this works is noticing how Jesus did things. More than once he told his disciples that he only did what the Father told him to. “Most assuredly, I say to you, the Son can do nothing of Himself, but what He sees the Father do; for whatever He does, the Son also does in like manner.” (John 5:19) If Joshua would have told the sun to stand still without the revelation that God had given them victory, that day would have been 24 hours like any other.

So, first we have to know God’s heart in a matter. (Never skip this step or you’ll end up very disappointed.) But once known, we have a vital role to play and God invites us to partner with him to work miracles – even phenomenal ones.

My very favorite part of the story of Joshua and the day the sun and moon stood still is this phrase; “And there was no day like that before it or after it, when the Lord listened to the voice of a man; for the Lord fought for Israel.” (Joshua 10:14) God said they WOULD win but then he listened to Joshua’s counsel as to some details of the WAY they would win. Isn’t that tremendous? God listening to a man; God partnering with Joshua to bring victory in battle. Think of it this way: God spoke and then Joshua spoke and creation itself subjected itself to what was spoken.

If it happened once it can happen again and our season in history may be the time of testing it. We are now in a battle bigger than five puny Amorite kings. The stage of history is set for the final battle which will culminate in the Second Coming of Christ. God has already spoken as to how it will all turn out. He has declared victory. Now, who is going to counsel with him as to the details of the way it will work out?

Would you like it to be YOU? I definitely would. Start preparing yourself. After all, by the time Joshua got to that day, he had already been in faith training a very long time. He had a track record with God and his ways and he was a fighter. He saw both the Red Sea part and the Jordan River to they could enter into Canaan. He saw Jericho fall.

How to prepare? This is going to sound too simple but don’t dismiss it. Align yourself with the truth. Start speaking only the truth. You may find it harder than you think. You may not realize how often you succumb to words, thoughts, speech, actions that do not line up with the Bible which is your handbook of truth.

Speaking the truth of God’s Word is the first faith platform. Get that deep down inside of yourself and then you will see how you will begin to speak to people and situations around you to bring them into alignment with truth. When someone says; “This is never going to get any better; I give up” you can counter with; “No, but if God is for you who can be against you?”

Win the little battles and get put in command of a larger army like Joshua. You may eventually be called to SAY to a mountain to be moved into the sea – either figuratively or literally. The day could come when God reveals a battle strategy to you and then asks you what you say about it. And in that time he will listen to you and together you will do mighty exploits like that famous Old Testament day. Then we will see its likes again.