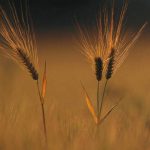 Some seeds sit in the ground a long time before germinating but don’t ever doubt that eventually a sprout will appear. I thought of this while reading an article in the paper about a rock star named Brian “Head” Welch formerly of the group named Korn. He has had a radical life changing conversion to Jesus Christ at 34 years old.

When Head was just 12 he associated with a Christian family. He asked about the peace he saw in them and the mother told him about Jesus. He asked Jesus to come into his heart but then drifted away from that decision. “There it is again,” I thought to myself, “that same story over and over.”

It is amazing to me how many people who have a deep dramatic conversion as adults had already taken a small step of faith as children. Often they barely remember the incident – at a backyard Vacation Bible School or at the end of church service during an alter call or at a church summer camp. But God remembered. They thought the seed had died but God tended and cared for it. For Head, it took 22 years of rebellion before his seed finally sprouted in its fullness.

If you have children, do all in your power to bring them to the Lord while they are young. Never feel they are too small to ask Jesus into their heart. That simple decision will bear big fruit. If your adult children made that commitment once but then walked away into rebellion, don’t despair. Remember Head Welch. And remember this; “being confident of this very thing, that he who has begun a good work in you will complete it until the day of Jesus Christ.” (Philippians 1:6)