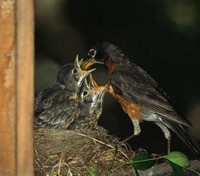 If you have a healthy mature attitude about raising children, you want them to grow up to live independent adult lives. Even though it means eventual separation, there is great joy in releasing them when you are sure they know how to function in every way from balancing a check book to running a washing machine. In fact, part of the definition of maturity in the natural realm connotes independence.

Funny thing, but spiritual maturity is measured in exactly the opposite way: dependence. You know the common saying: “God helps those who help themselves”? That isn’t found anywhere in the Bible and it even contradicts what God tells us in His Word. Frequently in scripture, it is only when every human resource or human “trying” has been removed that God shows up.

Psalm 40:4 says; “Blessed is that man who makes the Lord his trust.” Revelation 3:17 chastises the lukewarm church for this: “Because you say, ‘I am rich, have become wealthy, and have need of nothing’-and do not know that you are wretched, miserable, poor, blind, and naked–“

Where would you say you are at on the “Dependence” scale of zero to ten? Zero is utterly independent and ten is 100% dependent on the Lord. Are you still trying to handle your life yourself or have you done the smart thing and given up on that losing proposition? Even if you have been hugging the bottom of the scale for a long time, it’s not too late. Depend on the Lord. That’s where the smart money is.