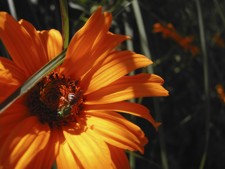 Sometimes we have an awkward relationship with someone and we don’t really understand why. I know a brother and sister right now who are not on the closest terms yet nothing really happened to cause it. Well, SOMETHING did, but the sister doesn’t know what.

My friend has told me that when she talks on the phone to her brother who is in another city, their conversations are very superficial. This is such a shame because they are now all the family that either of them has left. You might wonder why the sister doesn’t come out and ask; “What is wrong?”

Ah, that’s part of the problem. There isn’t even a comfort level to do that. My friend also senses that her brother would not be forthcoming with his issues. You know the old comeback to “What’s wrong?” is often “Nothing.” It doesn’t get you very far.

I have found in such cases that it is good to do two things: wait patiently AND keep extending yourself. Proverbs 19:11 gives good advice for such cases. “A man’s discretion makes him slow to anger, and it is his glory to overlook a transgression.”

Pray for God to open a path of healing. Sometimes things change in the most unusual way. Who knows the secret access that the Lord has to another person’s heart? I can think of some times when He worked changes in my own thinking, which brought about changes in my attitude to certain persons.