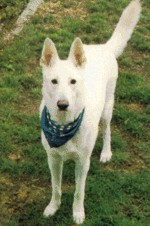 In May of 1994 I was in deep turmoil. We owned a White German Shepherd and he bit someone. My home insurance was cancelled because of the incident and I could not see any alternative except to get rid of him.

It was particularly hard to think of doing this because to us he was a “dog of promise.” He had been part of a whole set of miracles surrounding our family moving into a new house and we always felt God had put the little pup in our hands. In my distress, I began to pray fervently.

I couldn’t bear to put Aladdin down, but I could not take the chance that he would ever bite anyone again. Lord, what should I do? I needed wisdom of the supernatural variety!

One morning during prayer I happened to open the Bible to Psalm 36. When I got to this passage: “O Lord, Thou preservest man and beast. How precious is Thy lovingkindness, O God!” it seemed to jump off the page and strike me like lightning. I felt God was saying that I could preserve Aladdin’s life without fear that he would ever bite anyone again.

I hesitantly decided to trust this word and keep my “beast” but I also determined to modify his environment for safety. So it was. Well, Aladdin died in June of 2001 and he never did bite another person. The promise came to pass.

God’s specific word to me from the psalm proved true but I learned this truth also: “But if any of you lacks wisdom, let him ask of God, who give to all men generously and without reproach, and it will be given to him” (James 1:5).