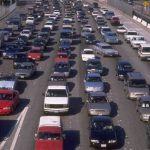 We probably each have within our repertoire of vacation stories one that we affectionately call “the trip from hell”. Here is mine. You can try to top it if you want to – I’ll listen. Write me.

First of all, there is nothing like starting the trip off STOPPED. My daughter Jessica and I were traveling to Boston to spend Thanksgiving with my other daughter Danielle. We had with us Jessica’s cat who definitely does not favor car travel. The cat quietly issued a steady “mew” as soon as we got underway. She also insisted on only sitting under my feet which got really old after several hours. About ten minutes into the trip we hit a huge traffic jam.

Car accident? Road construction? Sheep herds crossing the road? We had no idea but for over an hour we barely inched a few hundred feet. When we finally came to an exit we took it even though we had no idea which way to go next. That led to an experiment in back roads which we hoped would eventually put us back on the Turnpike we needed.

This back country was beautiful though very hilly and remote. What a shock when we entered a tiny hamlet and there was a road block; State troopers were stopping and searching every car. Why? We never knew. We were now more than two hours behind schedule, and we weren’t out of the state yet.

What more could happen? Oh much more. More slow traffic and outright stoppages, road construction across entire states, hours of torrential rain, aggressive maniac drivers, endless 50 mph speed limits for no discernable reason, and a book on tape we had brought that was the mother of all “downers.”

All in all, our trip was an extra four hours on the road that day. Three short days later we had to make the return trip home. On the way back, one more really awful thing happened.

I was driving and we stopped after dark to get gas. I got back on the turnpike and drove about thirty minutes before something didn’t look right. I saw a sign for a city we had already passed. WE WERE GOING THE WRONG WAY. We were now headed back to Boston.

Oh yes, we finally made it all the way home, and I have lived to tell it. There is a verse of scripture I should have memorized before the trip; “Let all bitterness, wrath, anger, clamor, and evil speaking be put away from you, with all malice” (Eph. 4:31). Did I mention I didn’t take all this too well? Poor Jessica took the brunt of my cranky impatience. She, on the other hand, exemplified verse 32 which says; “Be kind to one another, tenderhearted, forgiving one another.”

Future trips? We have agreed to fly!